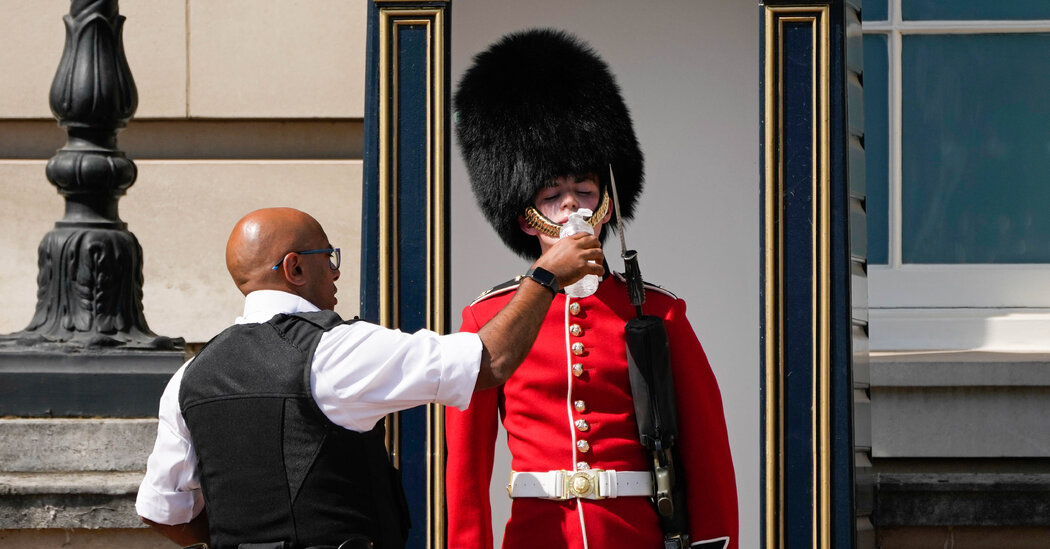 We’re covering the heat wave scorching Britain and a series of floods that have overwhelmed many Australian towns.

Much of Britain took an involuntary siesta on Monday as merciless heat scorched the country.

By midafternoon, temperatures neared 100 degrees in England — just short of a record high. Wales provisionally registered the hottest day in its history, with the thermometer in Hawarden hitting 98.8 degrees.

For a country unaccustomed to extreme heat, it was a struggle to cope. Rail service was limited over fears the tracks would buckle, flights at Britain’s largest air base were halted and the government urged people to work from home. Retailers reported skyrocketing demand for fans and air-conditioning units as people sought ways to stay cool in a nation where few homes are equipped with central air.

Hammersmith Bridge, a Victorian-era suspension bridge over the River Thames, was wrapped in a protective foil to keep cracks in the metal from expanding and threatening its stability.

In the first five days of July, Sydney was drenched with 8.7 inches of rain — double the entire month’s average rainfall. Some surrounding areas received over 30 inches.

The downpour caused severe flooding along the Hawkesbury-Nepean River, where tens of thousands of people were evacuated. For those families, it’s a familiar routine: This month’s storm caused the third — and in some places the fourth — major flood to devastate the area in the past 16 months.

Australia’s leaders have been quick to praise the “resilience” and community spirit of local residents. But as the cleanup begins again, that resilience is starting to falter. Residents are beginning to confront the prospect that a constant and exhausting cycle of evacuation, return and months of cleanup will become normal.

One woman in the town of Windsor recounted how she and her husband hadn’t moved back into their home after a flood in March when this month’s floods hit. Water went up to her neck and submerged half the house, leaving a film of sludge high on the wall when it drained.

Climate: Scientists say that Australia, like many other countries, is seeing an intensification of extreme weather. While it’s impossible to say how much climate change is responsible for the recent floods, said Jamie Pittock, an environmental professor at the Australian National University, “all the science points to climate change making this kind of flooding more frequent and worse.”

Japan’s leader forms his own legacy

In the days after the assassination of Shinzo Abe, the former prime minister who was killed this month, the country’s current leader, Fumio Kishida, said he would honor him by advancing his favored policies.

But Kishida, who has spent nearly three decades in the shadow of the more charismatic Abe, has also shown an effort to set himself apart from Japan’s longest-serving prime minister.

While pushing to include a revision of the pacifist clause in the Constitution and increase the country’s military spending — two of Abe’s most cherished goals — Kishida distanced himself from Abe’s specific targets.

“We must be realistic and concrete in our discussions but at the same time, not be numbers-oriented,” Kishida said last week.

Economics: With inflation rising, the yen depreciating, coronavirus infections increasing, the population aging and the birthrate falling, Kishida may find it difficult to expand government programs.

The War in Ukraine

José Eduardo dos Santos ruled Angola for 38 years. But he died in self-imposed exile in Spain. A dispute over where to lay him to rest has divided his family and could sway the August election in Angola, a country rich in oil and minerals on the west coast of southern Africa.

A pit stop for recovered art

A new museum in Rome will highlight the sometimes devious ways in which art can find its way into museums.

The Museo dell’Arte Salvata, or the Museum of Rescued Art, aims to showcase the myriad ways in which artworks can be salvaged — from thieves, from the rubble of earthquakes and other national disasters, or from the ravages of time by Italy’s expert restorers. But its first exhibition focuses on the recovery of looted art and pays tribute to Italy’s art theft police squad, a unit credited with effectively thwarting “the black market in archaeological artifacts.”

About 100 pieces — Greco-Roman vases, sculptures and even coins dating from the seventh century to the third century B.C. — are now on view at the museum. Their stay in the exhibition here, though, will be temporary: The artifacts will be returned to the museums determined to be closest to the site they were most likely looted from.