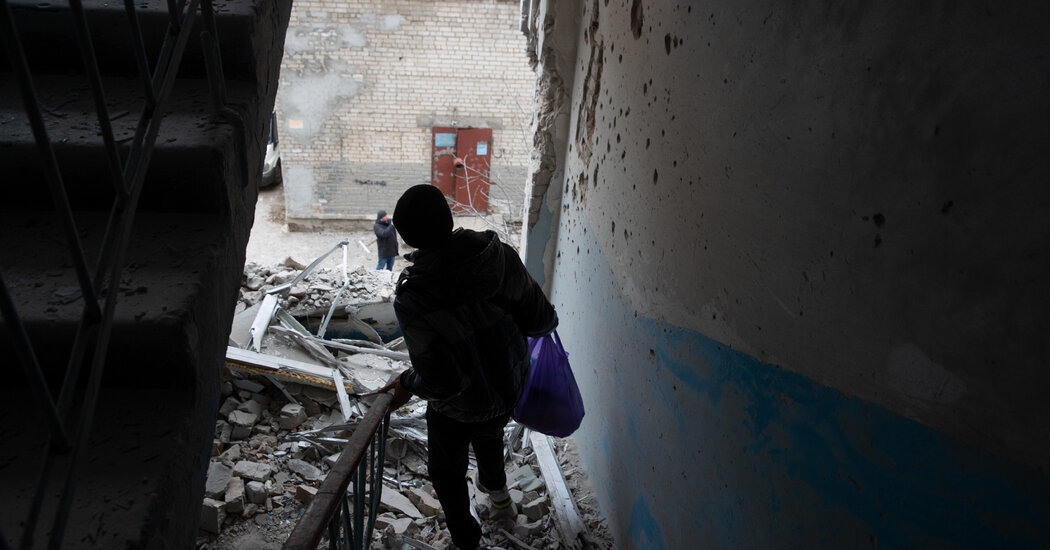 Russian forces are stepping up indiscriminate attacks on civilian targets and laying siege to cities across Ukraine. Fears are growing over the fate of thousands of Ukrainians trapped in cities without heat and enough food supplies.

As of Monday, 202 schools, 34 hospitals and more than 1,500 residential buildings have been destroyed since the war began, while nearly 1,000 towns and villages are completely deprived of electricity, water and heat, according to an adviser to Ukraine’s president, Volodymyr Zelensky.

Ukraine dismissed a Kremlin proposal to evacuate hundreds of thousands of people to Russia and its ally Belarus. Russian forces have kept up shelling of so-called evacuation corridors, where civilians are trying to flee. Follow our live updates.

At dawn, Russian forces unleashed a ferocious artillery attack on the southern city of Mykolaiv, hitting residential neighborhoods with rockets. By evening, the guns had died down, and Ukrainian officials declared that their forces had once again repelled the Russian onslaught.

Just a month ago, China’s leader, Xi Jinping, and Putin, met in Beijing and declared that their countries’ friendship had “no limits.” Less than three weeks later, Russia invaded Ukraine in the kind of unilateral military intervention that China has long denounced.

Now Xi is in a tough spot as he seeks a groundbreaking third term as party leader. After first sounding sympathetic to Moscow’s security demands, China has sought to soften its tone, expressing grief over civilian casualties and calling for an end to the war.

A Western intelligence report concluded that Chinese officials told the Russians not to invade during the Olympics, though it’s unclear if Putin had directly told Xi his plans. Either way, Xi’s warm embrace of Putin may have emboldened Putin to gamble on going to war in Ukraine.

Other international fallout: Bari, Italy, home to relics venerated by Orthodox Christians throughout the former Soviet bloc, faces a spillover of tensions from Russia’s invasion.

The Amazon is becoming less resilient

The Amazon is approaching a critical threshold beyond which much of it will be replaced by grassland, with vast consequences for global climate change, scientists reported.

A new study published in the journal Nature Climate Change found that more than three-quarters of the untouched rainforest lost resiliency since 2000, and that the loss was greatest in areas that were drier or closer to human activities like logging. The researchers who led the study said their findings showed that efforts to stop deforestation would affect the resiliency of the Amazon as a whole.

About 17 percent of the Amazon has been deforested over the past half-century. If the trend continues, losing the rainforest could add up to 90 billion tons of carbon dioxide to the atmosphere, the equivalent to several years of global emissions. Savannas would also take up far less carbon than the large, broad-leafed trees they replaced.

Quotable: “We have to get to zero deforestation, zero forest degradation,” Carlos Nobre, a senior scientist at the National Institute of Amazonian Research, said. “We still have a chance to save the forest.”

Other climate news: The Biden administration proposed strict new limits on pollution from buses, delivery vans and other heavy trucks.

Burundian drumming is a global phenomenon, featured in blockbuster movies and best-selling albums. But at home, the authorities have restricted it to official functions — and barred women from performing.

If you are lactose-intolerant, there are many more options for you now. Grocery stores carry milk made from soy, almonds, coconuts, oats and even potatoes, and the trend isn’t slowing down, Victoria Petersen writes in The New York Times.

Plant milks have existed for a long time. Coconut milk has been used for centuries in South Asia, South America and the Caribbean, and almond milk has been a staple ingredient in North Africa, Europe and the Middle East for nearly 1,000 years. But the growing popularity of vegetarian and vegan diets has turned them into a big business: In 2020, plant-based milks accounted for 15 percent of all retail milk sales.

“Living in a metropolitan hub like London, I have no need to be drinking cow, goat or any other animal’s milk,” Sarah Bentley, who runs a plant-based-cooking school, said. Her favorites: hemp milk, for its low environmental impact, and oat milk that is enriched with B and D vitamins for her son.