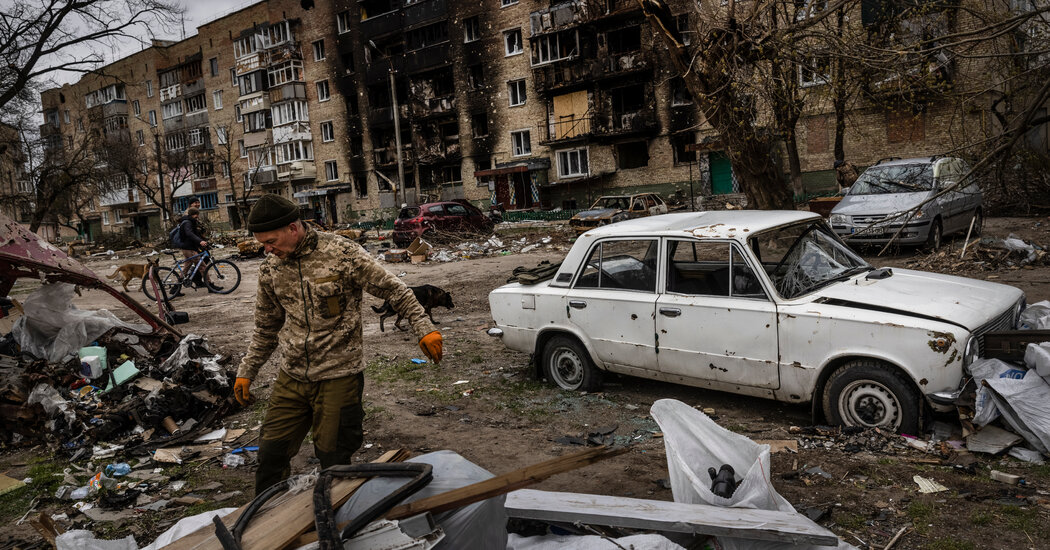 The much-dreaded Russian offensive in eastern Ukraine has begun, a top Ukrainian security official said on Monday. Russian forces had broken through the 300-mile front line, which runs along the Donbas and Kharkiv regions, at two separate points.

It comes after Russia pummeled Ukraine with one of the broadest barrages of missile attacks in weeks. Russia claimed that it struck more than 300 Ukrainian military targets, including fuel depots and warehouses.

The attacks included a strike on the western city of Lviv, where seven people were killed in the city’s first fatalities of the war. The attacks there upended the sense of relative security in a city that has been a haven for many fleeing the war in other parts of the country.

Russian forces also launched artillery strikes on major cities including Mykolaiv and Kharkiv, where six people were killed in residential areas. Those attacks have tied up Ukrainian forces, preventing them from joining the fight farther east as Russia prepared its offensive.

Banned weapons: It appears likely that Ukrainian troops used cluster munitions — which are internationally banned because of the harm they can cause to civilians — in an eastern village that they were trying to retake from Russian forces, based on evidence reviewed by The New York Times.

Economic stress: Russia’s central bank chief warned that the consequences of Western sanctions were only beginning to be felt, a stark acknowledgment that undermines President Vladimir Putin’s claims.

Religion: Around the world, the war is dividing national churches, parishes and even families as they reassess relations with the Russian Orthodox Church and Patriarch Kirill, who has encouraged Russia’s aggression.

Using some of the world’s strictest methods such as mass quarantines and border controls, China is trying to stamp out Covid in its biggest cities. Cases have started to dip in recent days, but newly released data show that the measures are inflicting a grim toll on the world’s second-largest economy.

China’s economy expanded 4.8 percent in the first three months of this year compared with the same period last year, slower than the government’s target. But much of that growth was in January and February, before the country was hit by its worst outbreak yet and many of its largest cities essentially shut down. As of March, retail sales — a crucial sign of consumer spending — were down 3.5 percent from a year ago.

The shutdowns also could feed inflation around the world by further disrupting supply chains. A sluggish China would also import less from other nations, including natural resources, like oil, and consumer goods, like cherries or designer handbags.

Details: At the end of March, 14 large Chinese cities had severe lockdowns, and the share of China’s economic output represented by those cities shrank to 8 percent from 14 percent.

In other pandemic updates:

Weaving through the country in the final days before France’s presidential election, President Emmanuel Macron and Marine Le Pen, his far-right challenger, have sought to recast major planks of their economic programs to appeal to those struggling to get by.

Perceptions of the economy could determine who wins, as worries about widening economic insecurity, along with the surging cost of living amid the fallout from Russia’s war on Ukraine, have become top issues in the race, ahead of security and immigration.

Just last week, Macron said he would consider softening his proposal to raise the retirement age to 65 from 62 to fund France’s national pension system — an idea that has received considerable disapproval. Macron has also vowed new tax cuts for both households and businesses.

Le Pen, who favors the current retirement age, has focused on economic issues close to blue-collar voters’ hearts. While Macron was trying to broker a cease-fire in Ukraine, Le Pen visited towns and rural areas across France, promising increased subsidies for vulnerable households and a 10 percent increase in France’s monthly minimum wage.

What’s next: French voters will head to the polls on Sunday, and Macron is currently expected to win in a tight race.

In the remote sub-Antarctic island of South Georgia, a series of ecological initiatives, including the eradication of several invasive species, has revived the life and landscape. With a seal population now in the millions, the island has turned into a soundscape of squeaking, barking, belching, groaning and growling.

Once upon a time, Barnes & Noble was the nemesis of independent booksellers. Now, it’s important to their survival, Elizabeth Harris reports.

Many readers and writers used to see the chain as “strong-arming publishers and gobbling up independent stores,” Elizabeth writes. But in an industry upended by online sales, Barnes & Noble helps readers discover new titles and publishers stay invested in distributing in physical stores.

The chain had been at risk of folding, but new management shored up sales by allowing it to act more like an independent seller. Nonbook inventory was reduced and purchasing was decentralized, leaving store managers free to choose whether to bring in more copies based on local sales.

“It would be a disaster if they went out of business,” a literary agent said. “There’s a real fear that without this book chain, the print business would be way off.”

What no one has been able to replicate online are accidental finds — books that readers come across in a store. Such discovery is crucial for writers who aren’t established names. “The more Amazon’s market share grows, the less discovery there is overall, and the less new voices are going to be heard,” the founder of an independent publisher said.