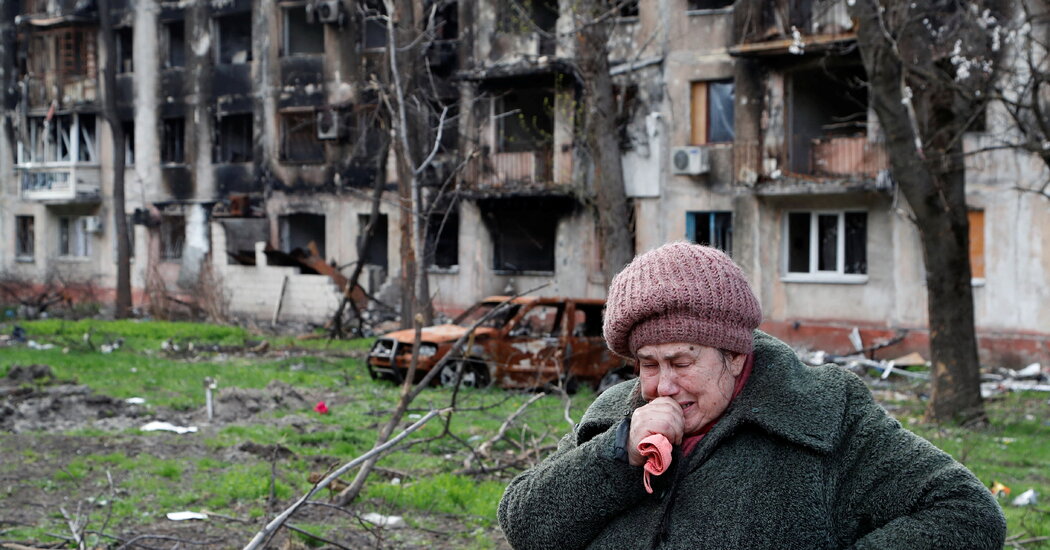 ‘They’re bombing us with everything’

Ukraine’s military said that its forces had repulsed seven different Russian thrusts along the front on Tuesday, destroying 10 tanks and 18 armored units in the battles. Ukraine’s Western supporters, led by the U.S., are now rushing to send longer-range weapons — arms that American officials said were designed to thwart the Russian offensive.

Calls for a cease-fire: Russia rejected a request to pause the fighting and allow for civilian evacuations in Ukraine, saying the demands were not sincere and would only provide time to arm Ukrainian fighters.

Mariupol: With Russian troops closing in, Ukrainian soldiers holed up in the besieged city issued a message of despair. “We’re surrounded; they’re bombing us with everything they can,” one Ukrainian soldier said. “Our only plan is for the blockade to be broken by our forces so that we can get out of here.”

In other news from the war:

A week after pounding rain caused one of the deadliest natural disasters in South Africa’s history, the government yesterday was plotting an arduous road ahead of cleanup and rebuilding, while still trying to recover dozens of bodies believed to have been buried under mud or swept out to sea.

The Durban area was overwhelmed last week by flooding and mudslides that killed at least 448 people, left around 50 missing, and displaced more than 40,000. Nearly 4,000 homes have been destroyed and more than 8,300 are damaged, said Cyril Ramaphosa, the president.

The latest consequence of a string of deadly, devastating storms across southern and eastern Africa, the flooding has underscored the increasing toll of climate change, especially for the most socioeconomically vulnerable, and amplified the need for a more aggressive government response to stem the rising number of weather-related fatalities.

Context: Much of the death and destruction occurred in settlements of flimsy shacks constructed by people who could not otherwise afford stable housing. Some took place in communities of small, cube-like homes that sit in valleys near rivers or cling to hillsides.

Quotable: “Very often, not just in South Africa, but in many other developing countries as well, there simply isn’t the money, there’s not the expertise and there isn’t the government will to invest properly in protecting the poorest in society,” said Jasper Knight, a professor of physical geography at the University of the Witwatersrand in Johannesburg.

Johnson adopts a tone of contrition

Boris Johnson, the British prime minister, faced Parliament yesterday, attempting to move on from a scandal over illicit parties at Downing Street that has threatened his hold on power and made him the first confirmed lawbreaker in living memory to hold his nation’s highest elected office.

Though the war in Ukraine and a lack of obvious successors have conspired to keep Johnson in his job, there are weighty legal and constitutional issues at stake. Opposition lawmakers hammered the prime minister for flouting his own rules and accused him of misleading Parliament when he claimed that the gatherings held in his office had not been improper.

Only a single Conservative lawmaker, Mark Harper, called on Johnson to resign. Several echoed the arguments of his cabinet ministers that the scandal was a distraction at a time when Europe is facing its gravest security crisis since World War II. Forcing out the prime minister now, they said, would be a mistake.

Apologies: Johnson apologized more than a dozen times, though he never explicitly admitted to breaking the law. He was especially contrite about his previous statements to Parliament, which pose a particular danger to him since they have been exposed as misleading, either intentionally or unwittingly.

From Labour: “He knows he’s dishonest and incapable of changing, so he drags everybody else down with him,” said Keir Starmer, the leader of the opposition. He urged backbench members of Johnson’s party not to follow “in the slipstream of an out-of-touch, out-of-control prime minister.”

In other virus news:

Working from home has given Japan’s corporate employees a chance to rethink their priorities, both personal and professional. Many want more flexibility, autonomy and control, putting new pressure on the country’s traditional job-for-life model.

R.T.O.: Finding your workplace more annoying than you remembered? Here’s how to handle it.

Days before French voters go to the polls to choose their next president, the nation’s political cartoonists are out in force, ready to accentuate even the smallest slip, Saskia Solomon reports for The Times.

“The world of politics is very artificial,” said Mathieu Sapin, the subject of the self-portrait above and a cartoonist behind several comic books featuring Emmanuel Macron, the current president, and his predecessor, François Hollande. “It’s very codified, which makes it deeply fascinating from a drawing perspective.”

Sapin is working with five other veteran cartoonists on the 240-page comic book “Campaign Notebooks,” about the 2022 presidential election. Each artist was assigned one or two candidates to follow for the course of the campaign — most of whom were eliminated in the first round on April 10.

Most of the book is already written. But the last 12 pages of the book are still blank, awaiting a final result that is likely to be close. “Anything can happen,” said Sapin. “That’s what makes it so thrilling.”