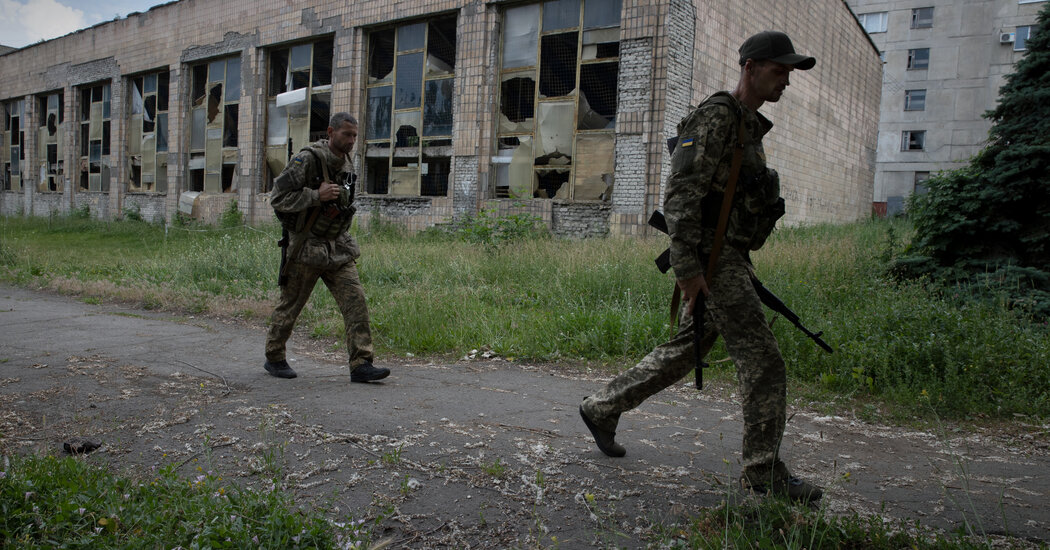 The eastern city of Sievierodonetsk is now cut off from Ukrainian-controlled territory after the last bridge to the west was destroyed. The development could intensify a humanitarian crisis at a critical point in the brutal battle for the Donbas region: Hundreds of civilians are trapped in the city.

As the outlook for Ukraine’s eastern front grows grimmer, some European officials are raising concerns over whether President Volodymyr Zelensky has a viable strategy to win the war.

The West’s growing hesitation to supply more weapons is frustrating some Ukrainian leaders. “If you think we should lose, just tell us directly: ‘We want you to lose,’” a senior adviser to Zelensky said. Here are recent updates.

What’s next: Western officials will meet in Europe this week to discuss the shape of continued aid to Ukraine. A top Pentagon official said the U.S. would not press Ukraine to make peace against its will.

China, the last country trying to eliminate Covid, has made mass testing a permanent feature of daily life. In many major cities, even places without reported cases, residents must show negative P.C.R. tests in order to shop, ride public transit and participate in other activities.

Officials hope the regular mass testing will help isolate cases before they spiral into bigger outbreaks. But the policy could hamper efforts to revive China’s economy.

Workers say the time required to get tested is cutting into their pay. Local governments are taking money from poverty alleviation projects to pay for testing. Businesses are concerned that the requirement will hurt productivity, and economists worry people will stay home to avoid the bother.

Response: Barely two weeks after Shanghai lifted its two-month lockdown, the authorities placed millions of people under new lockdowns, setting off scattered protests. The city has said that it will start charging residents for tests in August.

South Asia is home to millions of the world’s most vulnerable people. Climate change is making their hard lives even harder, as weather extremes increasingly become the norm and make it more difficult to address poverty, food insecurity and health challenges.

Pakistan has fought enormous forest fires. In Bangladesh, millions of people were stranded by floods that came before monsoons. Nepalese officials are trying to drain about-to-burst glacial lakes before they wash away Himalayan villages, which face a shortage of drinking water.

And in India, the region’s biggest grain supplier, farmers have faced unseasonably heavy rains and equally unseasonable heat. The weather has devastated farmers, many of whom are saddled with enormous debt and are dying by suicide in growing numbers. It has also threatened national and global food security.

Details: India’s wheat harvest was down at least 3.5 percent this year, based on initial information. Some districts in Punjab, traditionally India’s wheat basket, experienced a 30 percent decline. March was the hottest month in India and Pakistan in 122 years of record-keeping, while rainfall was 60 to 70 percent below the norm, scientists say.

Health: A new study found that air pollution in New Delhi cut life expectancy there by nearly 10 years, Al Jazeera reported. And researchers are drilling down on the ways that extreme heat sickens and kills people.

The case involved deep ethical questions about whether the legal principle of habeas corpus — which people assert to contest illegal confinement — should be extended to highly intelligent animals.

Eric Kim has spent a lifetime watching his mother cook.

When he was little, Eric writes, he was “a little shadow following her around our suburban Atlanta kitchen, tasting her kimchi for sugar and salt; helping her pick and wash perilla leaves from the garden for a family dinner of ssam; or, later in life, sitting at the kitchen island watching her crush gim, that glorious roasted seaweed, over a homecoming plate of kimchi fried rice.”

Now, Eric lives in New York City. He is a cookbook author and a columnist for The Times Magazine. But his mother, Jean, is ever-present in his cooking. “The way I cook now, the way I move and breathe in my New York City kitchen, has echoes of her movements, her breaths.”

Eric has developed recipes that define Korean cuisine for him. “If I could have only 10 Korean dishes for the rest of my life, these would be the ones,” he writes. Enjoy.

You only need 15 minutes for this zucchini dish, which includes chickpeas and peanuts.

“Grand Hotel Europa,” a novel originally published in Dutch, is a comedy of manners about what tourism has done to Europe.